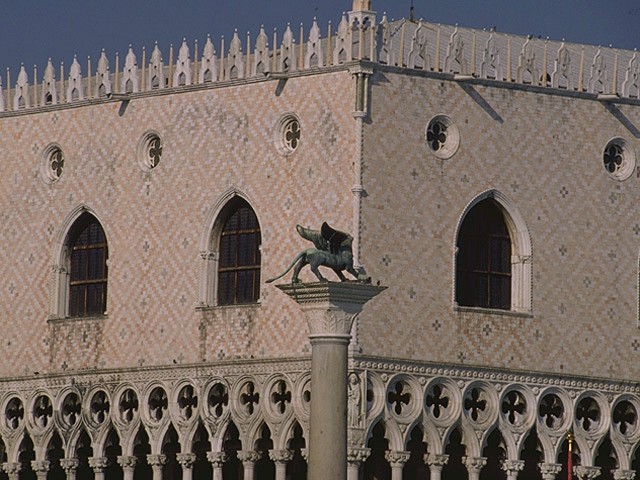 The Doge’s Palace, the only building in Venice where, at one time, it was up to this name, it is certainly the most famous building in the city, the most representative symbol of civilization and its history, political and cultural. Together with St Mark’s basilica in the background and the foreground square, helps to draw one of the most famous skyline in the world.

It is a unique example: it is more monumental than any public building and more valuable even than a princely residence. Still retains the charm of one of the most splendid palaces ever built, around which myths were born who made great Venice and its thousand-year-old Government.

For centuries it played three fundamental roles: it was the residence of the Doge, the seat of City Government and the Palace of Justice. It is in this place that had many of the most important decisions that have determined the fate of Venice and, sometimes, even in Europe.

Initially, when it was built in the 9th century AD, had the appearance of a castle, rather than a Palace, with four towers and high defensive walls. He was, in fact, in a strategic area for control of the city, near the access to the sea. Later, due to a series of fires and subsequent reconstructions, acquired the appearance it has today, that, namely, of one of the most beautiful examples of Gothic Venetian architecture.

This imposing building has a distinctive, typical of Venetian architecture: the lightness. Despite its considerable size, the polychrome decorations of the facade, the splendid Gothic loggias tunnels similar to a precious stone lace we return the image of a stylish, nothing massive.

There are also created a refined ‘ found ‘ architecture: compared to most of the medieval buildings of the rest of Italy is built exactly in reverse, with arcades below and the full wall at the top, while, normally, you would rather give this kind of massive base buildings, much better defendable.